Lake Philippa
I am under the gun to finish ALL of my to-do hiking list this summer. If I feel like sharing the reasons why, I will, but for right now let me focus on one of the oldest entries on my list; Lake Philippa. This was the hardest hike I've ever done, even harder than last year's Marten Lake Adventure. 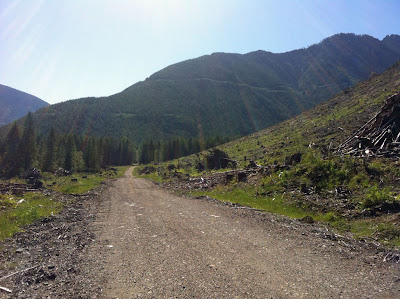 Logging Road to Loch Katrine / Lake Philippa Trails
Mysterious Lake Philippa lies between the road-accessible peers of Calligan and Loch Katrine. The deal with Philippa though, is that there is no maintained trail. Instead, one follows a "fisherman's trail" starting at about mile 1. 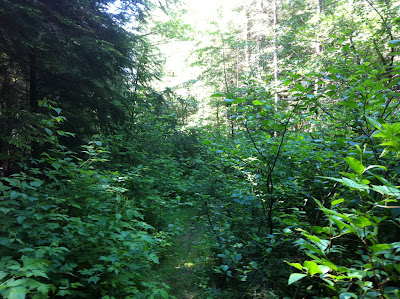 Beginning the Fisherman's Trail.
From there, one has to watch for trail markers. I personally got lost every 100 feet and had to learn to look closely for bits of tape or trash that marked the "actual" trail, as opposed to game trails. This can make for slow-going if you aren't used to doing it. 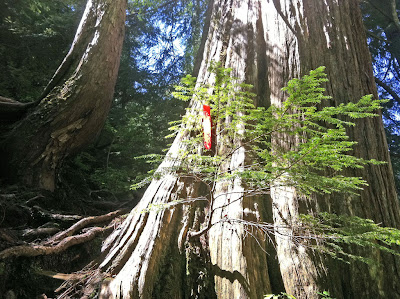 Trail Marker
Once the "trail" reaches the "end" of the valley, it crosses Philippa creek on some downed logs, and then the real fun begins. The trail goes straight up the side of the valley wall, sometimes at a 75 degree angle. One must use hands to climb on roots and bushes, with water and mud cascading down on you as you climb (at least during snow-melt season). Eventually the trail pops out into the sunlight and displays a cruel false summit. 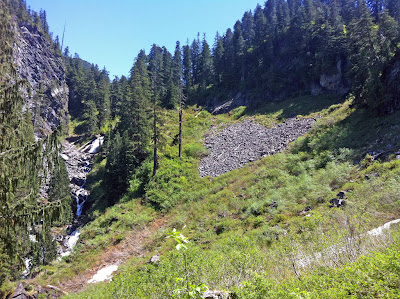 False Summit: a Stickery Bowl
At this point, I had been hiking for 3.5 hours. I lay down on a log in the sun and seriously considered abandoning this quest, but I realized I'd hate myself if I did that. So I hoisted my pack and kept soldiering. Part of the "bowl" was overrun with snow and I lost the trail. I stumbled around in the stickers for an hour before finally spotting a tiny little orange stripe 60 yards away. I trudged over to it, and it was a trail marker. Whew! Found the trail again. I was so tired now that the final 1/2 mile and 400 vertical foot gain took me an hour. 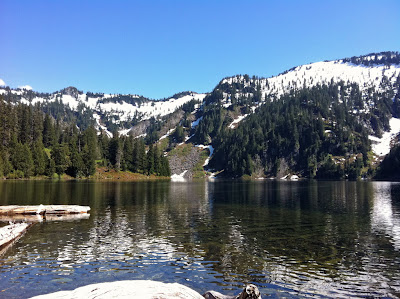 Lake Philippa
I stumbled down into the campsite of a couple of guys who'd gotten there the evening before (imagine night-hiking that trail). They said that the water was too cold for fishing; they'd been fishing all morning and had no action. I inflated my trail-boat and fished for a couple of hours anyway, never touching a fish. A low rumbling signaled a large stone/snow avalanche on one of the nearby peaks; very exciting to watch.

The trip down went faster than I expected, but not as fast as I hoped; it still took me 3 hours to get back to my truck. So my total hiking time was 8.5 hours. For that I was able to fish 1.5 hours with nothing to show for it.

Conclusion: The only reason that one might want to go to Philippa (unless you love a challenge) is to get away from other people. There are many, many prettier lakes nearby that are far easier (and safer) to get to. See just about any of the lakes I've written about on this blog! However, if you do go, plan on 5 hours to get to the lake and be sure you take the 10 essentials.
Posted by David Holmes at 12:09 PM