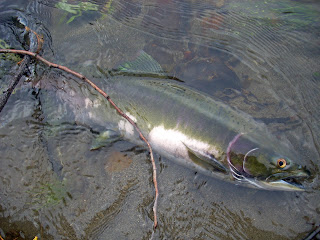 This year, like just about every other running body of water in the Northwest, the Snoqualmie had a fantastic run of Pink Salmon (also called Humpies). No one knows why the Pinks are doing so well when all the other colors are in decline, but we'll take it. By Indian Treaty, the Pinks are allowed to vote in Federal elections so they return every odd-numbered year to cast their house ballots.

In 2007, there were pinks in the Snoqualmie, but not so many that you could legally target them. In fact, prior to this year, to my knowledge, the Snoqualmie was closed to all Salmon fishing.

I myself have not been fishing since September. But Amy has been out on the river alot by herself. It is interesting in this day and age the reactions she gets: you would think, from people's expressions, that they were seeing a Giraffe standing in the river and not a woman. Amy says its quite annoying. People literally stopping, getting out of their cars and pointing at her.

On the other hand, several of the ladies from Church, upon finding out that Amy fishes by herself, have asked her to take them. Perhaps Amy could build a bridge between women and water in Snoqualmie.