Snow Lake, late in the day 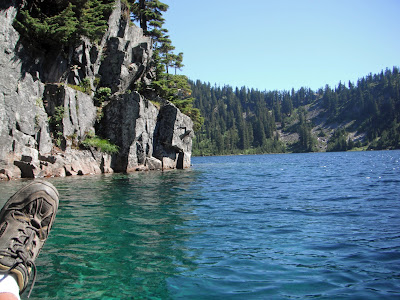 This time I arrived by myself and WITH my Sevylor Trail Boat. I floated the North Eastern quadrant of the lake for four hours. There was a constant wind which kept my back wet (a drawback to the fishing a large lake in a small flotation device) and required me to row constantly just to stay oriented. As a result I missed half of the strikes I got. 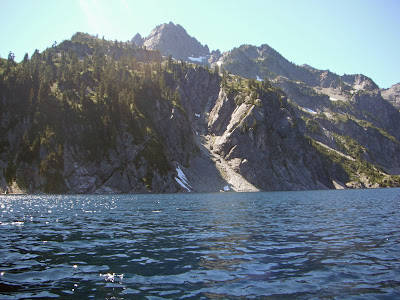 Throughout the afternoon I netted 7 fish, all between 2" and 7". I hooked another half-dozen fish, including some that felt like they had some heft but they all got away, to be caught again another day. As I packed my gear in the late afternoon, I decided that next time I'd start on the Western side of the lake. Or maybe just move on to Lake Caroline beyond! 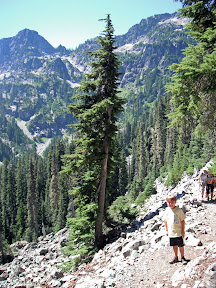 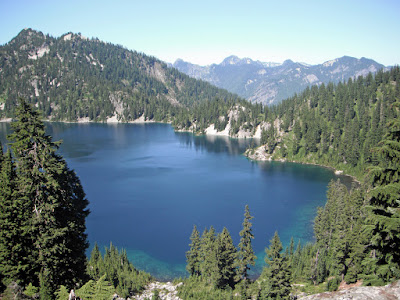 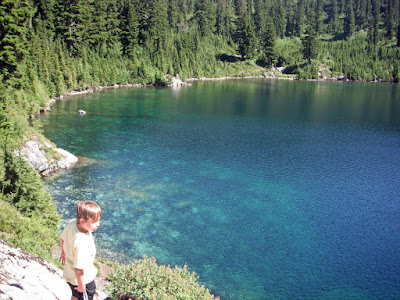 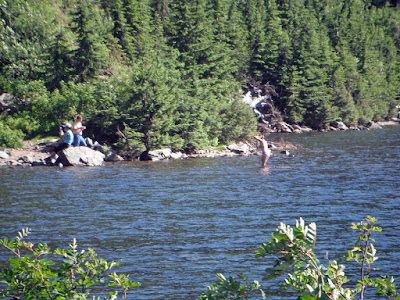 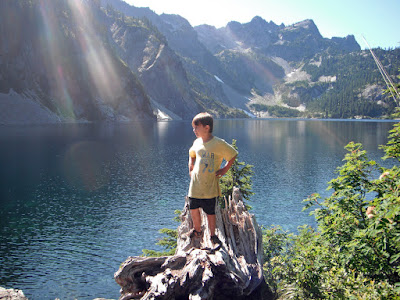 Okay, I'm feeling a little guilty. Soooo many of my blog entries this year have been not exactly in the Valley. And this one is even further away than most! Most years wewe take a vacation to visit our families back in Colorado, which is another fine fishing state.

This year we were in Colorado for 9 days. My father and I drove up to Grand Mesa and fished a lake that we had "discovered" last year and we had a ridiculously good day of fishing. It was non-stop action from launch to take-out. Between us we landed maybe a dozen fish, and lost many more. We fished until the last possible moment and then high-tailed it home, with five trout for my mom (who fried them immediately). 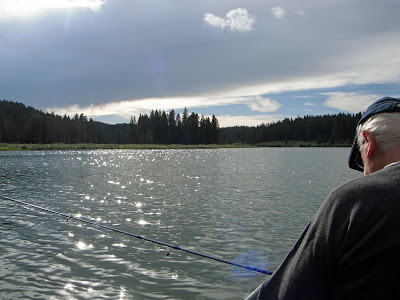 A couple of days later, we returned to the same lake but were soon caught in a summer thunderstorm. The rain and hail were NAILING us as we motored our little boat back to the launch. I was breaking down all the gear when a flash of lighting lit everything around me. A tenth of a second later the thunder ripped the air all around, chasing me into the truck's cab. My dad, who was safe inside, said that he thought it had hit less than 500 feet away. I had no choice, I went back out and kept stowing gear. Again, lightning struck very nearby and I found myself in the cab again a second later. Finally, I had to go back out and finish stowing all the gear, knowing that we are at 11,000 feet in the middle of a lightning storm. I got it done but just barely. 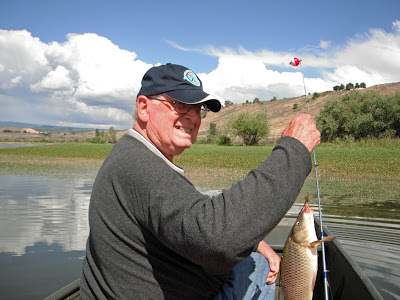 We drove back down into the valley, surrendering the Mesa to the storms. Our map showed a body of water on the way home that we were unfamiliar with; the Fruit Growers Reservoir of Orchard City. The launch was decrepit, the water was murky and there were signs that said something about health hazard but they were so shot up with buckshot that we couldn't read anything else. We launched anyway, and caught Carp for a few hours using flies and worms under indicators. 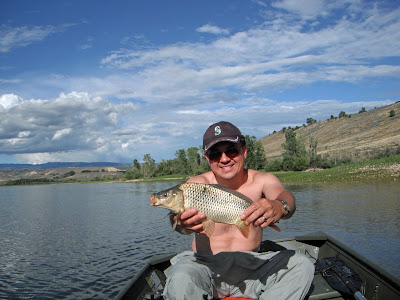 I explained to my dad that Carp is the new rage in the PNW but I don't think he believed me; "Do you realize that they call these fish 'turd suckers' in Texas?" he said. I told Casey that and he thought it was hilarious. Anyway, the strong-fighting Carp were a hoot! They were chasing minnows in the shallows and we could tell when they were near us because all of the sudden the water all around our boat would boil with little fish jumping out of the water in fright. We'd put our flies and worms in the water and BOOM, carp on. 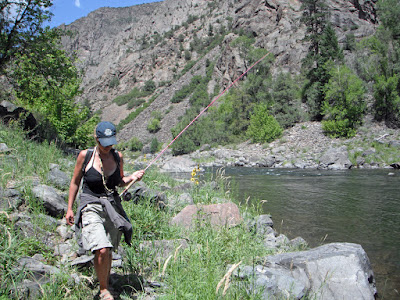 Skunked on the Gunnison

Amy and I took a morning and fished the Black Canyon of the Gunnison, one of our favorite places in the world to fish. But sadly on this day, the fish just weren't co-operating at ALL. We fished HARD for about 5 hours with not a single tap to show for it. The water was low and the sun was hot. It sounds like we had just missed a great stone-fly fishery by a couple of weeks. As we were driving out Amy said dejectedly "The Gunnison is no longer my favorite place to fish." 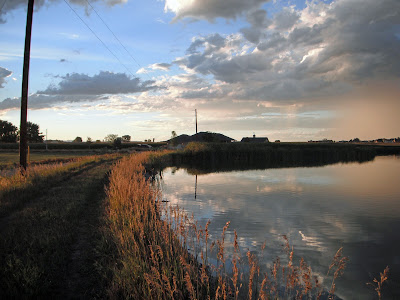 In Loveland, we tried to fish for the carp in the nearby irrigation pond (they grow HUGE there) but again, the fish weren't co-operating! I hooked one but broke my fly off in its face. Part of the problem was that almost every single day we were in Colorado we were plagued by intense afternoon rainstorms. In the photo above, the blur on the right isn't a smudge, its yet another thunderstorm coming. The rains definitely kept the temperature down but they also supressed the fishing, too. I can't remember ever getting rained on so much in August!