I stopped at Rocky Ford the other day.  It is not my favorite place to fish in the world. Getting skunked when you can see every fish in the water is frustrating.  But since I was there, I figured I'd wet a line.  I tied on a fly that I didn't think would work very well - a #12 olive Gold-Ribbed Hare's Ear and fished it under a Thing-a-ma-Bobber(tm) indicator. 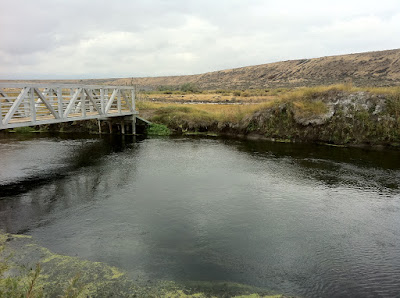 Four casts later, my indicator went under and I set the hook on a big fish just under the bridge.  It ran down into the main pool (first picture).  I netted the fish which was a very nice 18" rainbow.   A few more casts to the same place and I hooked another, similar fish (or maybe the same fish) but it got off quickly.  Ten more casts and I looked away for a second as another angler walked by.  When I looked back to the water, the indicator was gone.  When this happens, you set the hook!  So I did, and hooked an even bigger fish - twenty inches was my estimate.  A jump and a few splashes later and it was gone, leaving me with a bent hook.

I drove upstream to the dock and fished from there.  A few long casts later, the indicator dove so I set the hook on a big, fat fish.  It zoomed around the pool and when I saw the size of it I knew that netting it was going to be difficult with my little collapsible alpine-lake net.  I gave the fish some slack, hoping he'd free himself but this guy wasn't going anywhere.  A long battle later and I landed him.  You can see he just barely fit into the net!  The numbers on the net show him to be over 22".  A real beast of a fish!

The lucky fly that hooked all these fish is my own version of the Gold Ribbed Hare's Ear.  Actually, my version is only different from the standard in that: a) the bead is moved into the body instead of tying it above the head and b) the thread and dubbing are olive color.  I also use elk hair for the tail because its easy to work with (and I'm lazy).

This fly uses olive dubbing for both the front and back sections, with Pheasant Tail being the wing-case.  With few exceptions, all my flies adhere to A.K. Best's philosophy of using only natural materials (hook, beads and wires excluded).  Did I tell you that I once had a long conversation with A.K. over a couple of cigarettes, back when I still smoked?

The finished version of this particular fly looks like nothing so much as a green lump with hairs sticking out.  At least, that's what it looks like to humans.  To trout it looks like a scud.  After hooking four big fish in an hour, I went home and tied a bunch more of these, of course!