My fishing friend, the amazing Rex Takasugi, invited me to share in a trip to a "pay-to-play" lake in Eastern Washington. The new owners of this particular lake are adhering to a very strict regime of proper quality fish management and it really shows.  The old name for the place is Isaak's Ranch.  All of the fish caught fought really well.  The number of days fished and the number of anglers is strictly controlled and this makes for a richer fishing experience.  The fish are also rested over the summer and the winter. 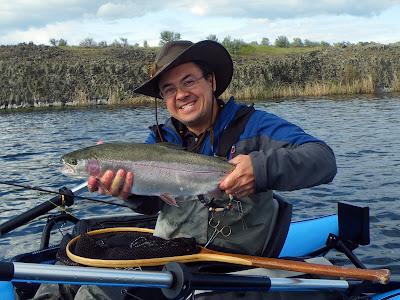 Because this place is so far away, Rex and I left the evening before in his new Subaru and drove to Soap Lake. We stayed at the Masters Inn in Soap Lake, which was friendly, clean and moderately priced. Next morning we walked around town until we found a place to eat. Then we drove up north to Coulee City where we met our guide Darc (rhymes with parse) who confirmed our directions to the location. About 30 minutes later, we were parked next to the lake, unloading Rex's pontoon boats. That's right, he even had an extra pontoon boat for me, that's the kind of guy he is. 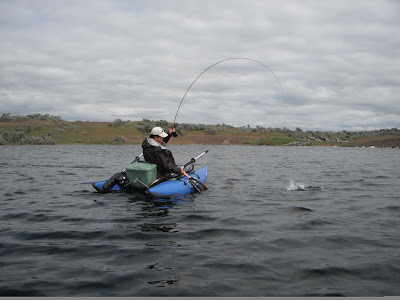 Within a few minutes of being on the water, Rex, hooked and released a 22" fish. I got a 19" fish, which turned out to be the smallest fish of the day. Soon we moved to the far side of the lake where we joined a few other anglers. Everyone was catching fish. Rex for the most part stayed with this deadly T-Nymph while I switched to fishing chironomids under and indicator. 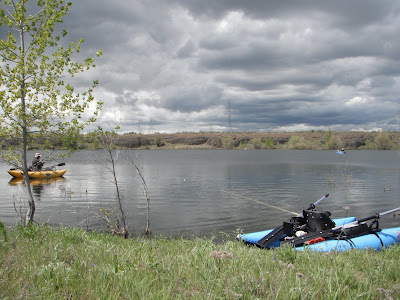 Soon I was hooking and landing fish after fish. They were all 20-21" long. I lost count of how many. Probably a dozen or so. I could have easily fulfilled the life long fantasy of 20 fish that are 20" or more, but in the afternoon, Rex and I decided to try for bigger fish. 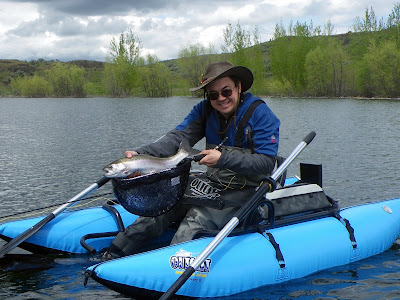 We switched to a different part of the compound where they keep the really big fish, which are fewer and  harder to catch. I hooked one of the big ones but it bent my hook. Actually, I had 3 bent hooks that day. 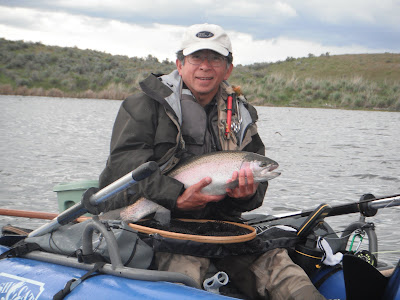 Rex hooked and caught four of the big ones. They were approximately 25-26" and 7-8lbs. EIGHT POUNDS. Look at them, they are so big he has to hold them like babies! SICK MAN, SICK!!!!! 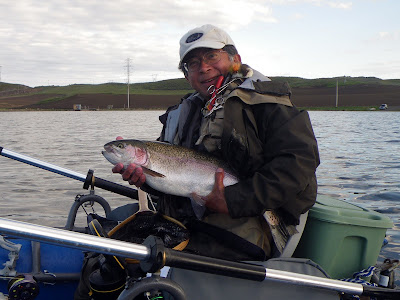 If you want to fish Isaak's Ranch (when it re-opens in the fall), contact Darc at the Desert Fly Angler in Ephrata.  And if you go maybe you'll see me there, because I'm thinking about going back and landing one of those hogs myself.
Posted by David Holmes at 9:00 PM 0 comments