Hancock Lake, up the in Hancock tree farm (no relation in names AFAIK), is an interesting lake of perhaps 200 acres. It is somewhat unique in that you can very easily catch three different kinds of trout in every visit; Eastern Brooks, Coastal Cutthroat and Rainbow trout.

On this visit, the water was higher than I'd ever seen it -- almost nowhere to park. And I did catch all three species of trout, mostly on a carey special. The trout were smallish but the action was consistent and satisfying.

There was a fantastic Callibaetis hatch right at dusk -- probably a hundred of the little guys hitched a ride back to the launch on the jon boat. We were all facing forward.

There's an interesting landslide of perhaps 80 vertical feet on the other side of the row of houses. I don't know when it happened -- maybe over this past winter. Good thing there wasn't a house there, or it would be submerged like the firs you see in the picture above.

The middle of a chain of three, tea-colored and slightly boggy lakes is Boyle Lake. I've never seen another soul at Boyle. Talk about private fishing. Last year I hiked all my gear in -- about an hour of lonely walking each way. This year I have the pass so I was able to drive in late in the day and then leave right at dusk.

Lots of smaller fish rising and jumping. Saw several trout around 8" leaping out of the water. Maybe they were jumping to evade giant predators! That's what I tell myself anyway. Actually, its more likely they were jumping to try to shake off their fish lice, which was a problem in this lake last year (see 2008 post).

The fish were not interested in any of my subsurface presentations so again I was forced to switch to my ratty mayfly imitations. I missed many strikes, mostly because the fish were so small. I chased a pod of smaller fish across the lake only to discover that this pod was bass, not trout after all. I did land one of those smaller trout, though; and he had no lice (yet)!

Upshot: there should be bigger fish in there, I just didn't see them today. Worth a try again soon.

Tiger Mountain: Round and Tradition Lakes 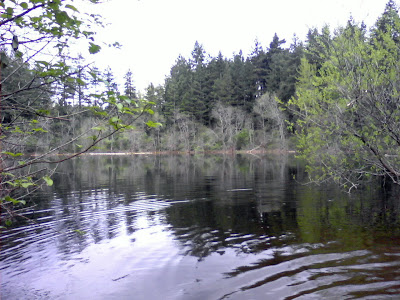 Round Lake, at its fullest

A few weeks ago, Casey and I stumbled across this funky little lake in Tiger Mountain state park. Its Round Lake and its about 2 acres. Maybe not even that big. Looks very fishy though!

On Friday, after work, I returned there with a float tube. One of the most exciting feelings in the world to me is stepping into new water, even if its a dinky like pond like this one. The water was a warm soup with tadpoles everywhere. If there are fish in there, they would be very well fed! The pond is not more than 5 feet deep anywhere and I now have my doubts that there are fish that live there year round. After an hour I packed up and headed down the (dirt) road to Traditional Lake. 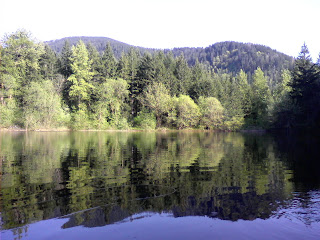 Tradition Lake is rumored to hold large (like 8 pounds) bass. And I've met guys who say they do well there. I'm not one of them; I was skunked there again. Its a little early for the warm water fish but I figured the fishing spirits would give me a little dink or something so I could avoid a double-skunking. But there it is. 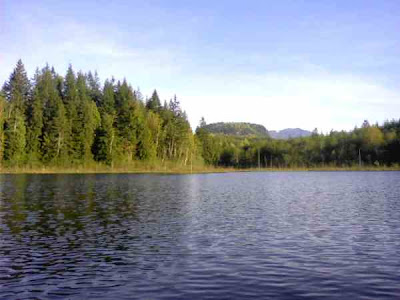 Gotta get some value out of my tree pass. And I had to get some fishing in or I was going to go Crazy. Got up early, gassed up the truck, grabbed a sandwich and some coffee a headed into the tree farm. I spent about an hour looking for a couple of those "blue dots" on the Hancock tree farm. One eluded me entirely. The other one was blocked by a tree across the road. I was determined though and I parked the truck and hoofed it until I found that second blue dot. It was a large lake but so shallow that there was no open water. Another few years and it'll be just another peat bog.

Anyway... Black lake. No one there but me on a sunny Saturday. That's why the pass is worth it -- the solitude. I fished about 6 hours, listening to Fresh Air and then the Mariner's Game. Landed 15 rainbows, but they were all < 10". That's okay though -- good enough for today. Almost all of them were caught under and indicator -- Amy would have loved it.

Lastly, a friend of mine had lent me his audiotape of Hemingway's The Big Two Hearted River. I listened to it today while driving to the lake and it was fantastic. If that story doesn't make you want to take up fly fishing.... Well, this report certainly won't!