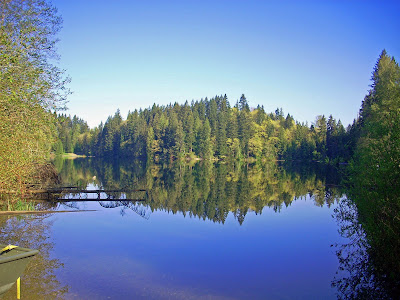 The weather was due to be outstanding and a wonderful friend (Thanks Alex) from our church agreed to pick up Casey after school (and take him to soccer practice!) so that Amy and I could get a weekday of fishing in. Yes, this means that Amy and I missed Casey's first soccer practice (we heard he scored four goals); we are not going to win any parental awards, but we knew that already.

Langlois seemed slow to me. The water was too calm and there were too many other people for a weekday -- doesn't anyone have jobs anymore? Oh wait, in this economy maybe they dont't.

We fished Langlois for a couple of hours and decamped at noon. In North Bend I bought the Hancock tree farm pass for the first time in a few years. We lunched at the Mexican place next door, filled our coffee's at Huxdotter and then we were off to the Tree Farm. 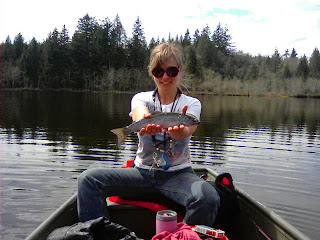 There was one other guy at Klaus but we never got close enough to talk to him. Normally Klaus fishes VERY slow. I have been skunked there more often than not -- but we got into fish right away - a double-header to start. All the fish were between 8-13" and their size varied quite a bit so I'm wondering if they are all still self-reproducing there. I dunno. Good time though.

Finally tally was 25 fish between the two of us for the day. Not bad! My birthday (the 28th of April) usually coincides with Opening Day of fishing season. This year was no different. For my birthday we treated ourselves to a day of fishing. W had debated where to go

We decided to return to our one of our old favorites -- Deep Lake in Nolte State Park. It's a beautiful, undeveloped, quite natural lake that is 100' deep due to an orphaned glacier (global warming). The boat launch was even MORE in accessible now due to the park being officially "closed" due to winter weather damage.

But there were a few hardy souls fishing the lake besides ourselves -- perhaps four other boats and many bank fisherman.

Amy and I caught little planted rainbows for hours and hours. She fishes chironimid-style almost exclusively now and she did okay at it. I fished the new Six Pack fly. We fished until we absolutely had to leave to pick up Casey from our friends house. Nice day.

Cheyenne and I visited one of the neatest little sub-rural lakes in King County; Shadow Lake. There was a terrific Mayfly hatch going on and I chased pods of fish around the lake all day.

I hooked 6 fish on my ridiculously amateur mayfly imitation, including one holdover that broke me off! He fought like a great fish and I almost went home after he got away because at Shadow Lake you only get a single shot at fish of that quality per trip.

My sister Patti graciously gave us four gift certificates for weekend-child-sitting for Christmas. This is literally the most precious gift I think I have ever received. Amy and I took advantage of the first one this weekend. On Saturday morning we performed that magical annual ritual whereby we dump all the flies I tied over the winter on to the table and then put them into fly boxes. This had been a productive year for tying; my favorite fly was a copy of the Six Pack that I picked up from the Ephrata flyshop.

We got a late start partly because Amy and I both burned a couple of CDs to listen to. His: Tenacious D. Hers: Lady Ga Ga, Beyonce.

The Quincy Lakes area, if you've never been there this time of year, is literally CRAWLING with campers. Hundreds of people camping, fishing and Equesting (is that a word?). Though the area has many lakes, it seemed everyone was fishing at Quincy Lake -- so that's where we put in our boat. Quincy Lake is a long, skinny lake camping areas and a launch at the west end and a cool little bay at the east end. We fished for about three hours, during which time we each got a couple of hefty fish. The fish were quite hefty and numerous.

The best was an impressive trout of about 20" and maybe three pounds (#16 black snowcone fly). I recorded some video of Amy netting him but somehow the video was lost. Oh well. We'll have to go back and catch him again.

We left Quincy Lake and tried neighboring Burke Lake where there was only one other person fishing. There was a reason for that -- aside from Amy catching some miniscule trash fish, there wasn't anything going on. I guess they haven't planted Burke yet. We also tried the Evergreen Reservoir for a couple of hours in the totally crazy hope that we'd hook into a Tiger Muskie (must be 50" to be keep-able), but aside from beautiful weather it was a bust. So we can say that the fishing at Quincy was great anyway, if a little crowded.

The second day of Fishing was all the way on the other side of the state in Mason County: Lake Nahwatzel, which is a 300 acre lake surrounded by forest on one side and houses on the rest. The weather was PHENOMENAL. 55-65 degrees while we were there and near constant fishing action. By the way, from what I could tell, all of Mason County is a tree farm. The Six Pack Fly (see above) really came through, catching all ten of our fish. The fish were simply not interested in anything else, though we really tried many other flies. I got quite a sunburn on my face.

The fish were impressive in their girth and length! We kept two for the frying pan - two 14" fish. We had a lot of company but because the lake was so large it never felt crowded like Quincy did. All in all a great weekend of lake fishing!