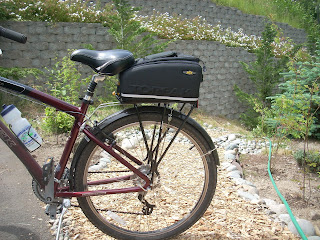 Ever since I got my Trek Navigator I've been looking for something put on that shelf in the back. Well I found it what I was looking for. The TOPEAK MTX TrunkBag EXP is just plain awesome. It slides into the shelf and locks automatically. To unlock it you just press down on the yellow clip and pull it out. The main cargo area is about a half-gallon. Plenty of room for a paperback, some candy bars, bike lock, spare tube and pump, which is what I have back, there now. But the COOLEST thing about the trunkbag are these fold-out side pouches that fasten to the bottom of the shelf. The pouches are roomy! You could fit a bag of groceries on each side! In the picture below one side is full of used clothes that I bought from someone who works about a mile from my house. I just rode up there and bought them and transported them home in my little pouches. Its so nice not to have to wear a backpack in the summer! 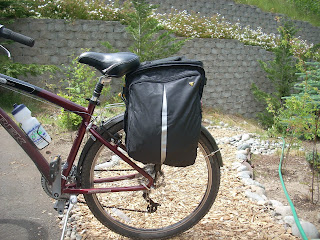 I am so enamored with handy accessory that I felt I must trumpet my approval on the blogosphere. 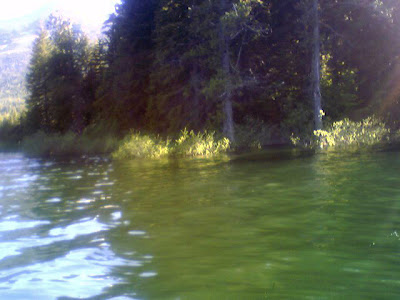 Submerged Trees on the south shore of Lake Keechelus

I've been thinking about fishing Lake Keechelus since last summer, in spite of the fact that Keechelus is Indian for "not many fish." I reason that not-many-fish may also imply quality over quantity. For those not familiar with it, Lake Keechelus is that reservoir at Snoqualmie Pass paralleling the free way for several miles. Most of the time its very low or empty but right now it happens to be quite full with all the run-off we're having this late season. The reservoir itself is on the large side (2500 acres) and contains wild rainbow trout, cutthroats and land-locked sockeye salmon (aka kokanee).

When I turned my truck onto I-90 this afternoon I was quite excited and also ready to get out of the 90 degree heat down here. Earlier this week I installed the mounting bracket for a Lowrance Cuda 242 fish finder. The installation involved drilling holes under the waterline of my boat which understandably made me pause but I had already determined that the mounting was watertight with an exploratory trip to Lake Alice yesterday. I have been day dreaming of using the new fish finder to catch those land-locked salmon on my fly rod for some time and today was my chance.

At 4:30 I was lauching my boat into a light breeze in the highest water I've ever seen at the reservoir. As you can see from the top picture, not only is the lake all the way up in the trees, its COVERING most of the trees! Right in front of the boat launch you can look down in the water and see the tops of trees everywhere! Here's a picture of a hill that is usually 20 or 30 feet tall. Today its just a four-foot-tall island. 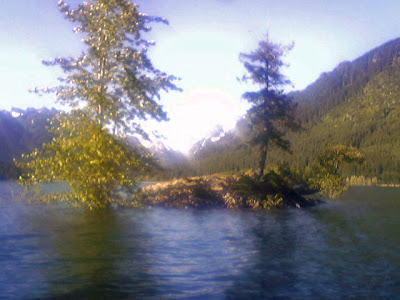 You could get out and fish off this island

I spent most of the next two hours dulling my brain listening to the Jeff Foxworthy radio program and staring into the new fish finder. Let me tell you that installing this fish finder on to my aluminum boat has been a total pain in the ass, but finally its paying off by showing me water temp and bottom contours. Because its actually mounted (and not just dangling) it shows the same accuracy when I'm moving or not. Its REAL (just not color). In the picture below you can see the suggestion of fish about 10 feet down but don't believe it -- the sensitivity was too high and that was just a couple of phantoms. 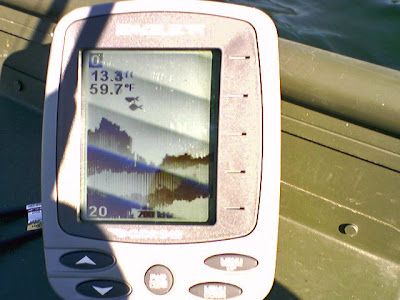 I spent an hour paralleling the south shoreline and it was 5:30pm when I realized I was now sunburnt. I moved the boat right up to the shade at the shore and began stripping my line instead of just trolling. Suddenly there was a jerk on my line! I felt an unexpected thrill, (and not just because I have been skunked the last five times out). I could scarely believe that the fish and I had actually found each other on this giant lake! The fish was only a little silverly 6" thing. I netted and I tried to ID it. Its mouth ended flush with the back of its eye so I'm guessing it was a rainbow and not a cutt? It was all silvery but its bottom fins had a yellowish hue. What whas it? Rainbow or Kokanee?

Well, whatever it was, I was so happy I caught it.

I stuck it out on the water until 6:30 or so and then called it a day after only 2 hours of fishing. I had burned my arms pretty good. I may go back again the morning and fish for longer.