The very next day after the hardest hike I'd ever done, I got up at 5:30AM, stumbled down the stairs on shaky legs, got back in the truck and drove 3 hours to Dry Falls Lake to meet my friend James Speaker.  We started fishing at around 10:30am.  The water was VERY warm and we were the only anglers there, suggesting that perhaps the season for Dry Falls had already reached its summer low. 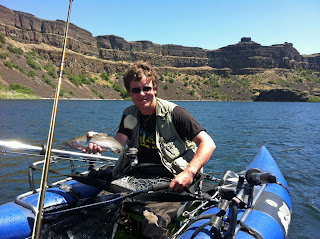 We hooked but lost a couple of fish on the way across the lake.  Eventually James hooked a nice fish on a damsel pattern.  He netted it and we got a good pic.

I was just starting to get into some fish when I noticed that my boat was riding lower than it should have been.  My pontoon was deflating!  And I was all the way across the lake from the boat launch.  PANIC.  I yelled to James and started rowing frantically.  We got back to the launch okay. 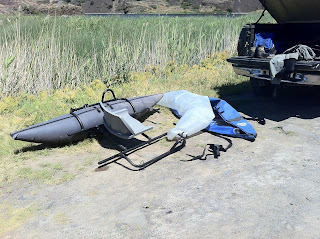 I tried to repair the bladder in the pontoon but it was no use, it just wasn't working.  So we bailed on Dry Falls and drove down to Rocky Ford, where boats aren't required.  It was quite hot and dusty.  Some burned out looking dudes were camping in the parking lots. 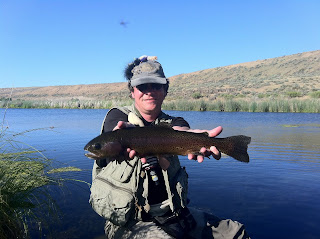 We fished the lower stretches of the ford.  James hooked a beautiful rainbow under an indicator using one of his awesome Rocky Ford Scud patterns.  Great fish. 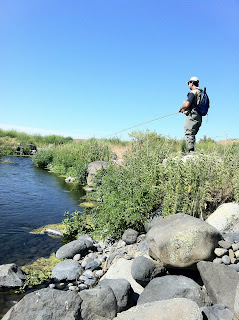 I was having no luck until I switched to fishing a snocone fly.  The second it hit the water, the biggest trout in the pool zoomed about 15' over to it.  I was saying "no, no, no, please don't eat it!"  But he did.  Soon he was freaking out and zipping all over the Ford while I tried to hang on.  He ran behind a boulder and bent the hook and my line came shooting back.

I ended up getting skunked both at Dry Falls and Rocky Ford.  No fish landed.  That happens when James is around partly because he's such a great fisherman that he's going to get the action, but also because he's such a great guy to fish with, I don't really care if I catch anything.  I kind of just like hanging out and talking.  Of course, we could do that in town!
Posted by David Holmes at 11:20 AM