Panorama of far end of Lower Hyas lake.
Continuing that long weekend: after fishing with James, I stayed the night in Ellensburg so I could get an early start the next day. You see, the Cascade mountains are still PILED with snow, far later into the year than anyone had ever expected. Funny: on the local hiking bulletin board this winter, there was great debate about snow levels. The "doom-sayers" were assuring us that even though we had record snow fall, the snow was in fact melting faster and faster each year and that this year would be no different. Ha. 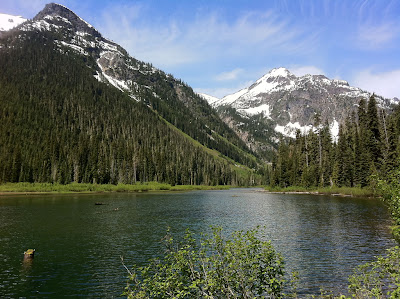 View to Upper Hyas
On the map, it seems like the trailhead to lake Hyas is relatively close. Don't be fooled, it takes FOREVER to get there due to many low mile-per-hour streches. The last 15 miles is on dirt road and takes about 45 minutes. The hike to Hyas was beautiful, and I'd got there before anyone else. 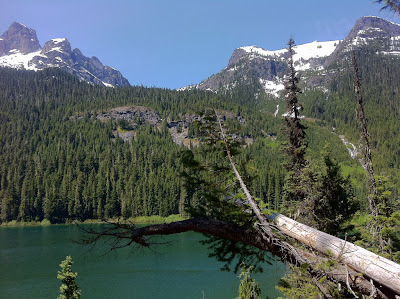 Cathedral Peak
The water level at Hyas was higher than normal, and windier and colder. I kept on walking; my destination was Upper Hyas, just a mile further. Upper Hyas, too, was overflowing with cold, cold water as the sunny day melted the snow in the mountains around. I couldn't even get to the main lake without trudging through 30 yards of surrounding mud, so instead I sat down on a log, ate lunch and enjoyed the view. I back-tracked to lower Hyas and fished from shore, but I could tell it was still too early in this crazy season.
Even though I didn't fish, I've crossed Upper Hyas off my list. The scenery there is beautiful, the campsites plentiful and I recommend it as a destination for anyone with young ones.