For some people, like these guys, the Marten Lake Trail is "hard" but not much more than that. To my friend Vlad, the Alpine Lake Ninja, its a walk in the park. But to me, Marten Lake was the Meanest Trail Ever. Its has been on my TO DO list for three years, but I knew that its ascent was just at the edge of my ability. At 8 miles round trip and 2000 feet elevation gain, most of it on unmaintained "fisherman's trail", I knew it would be significantly harder than any hike I did last year. However I've just come back from a Mission Trip that expanded my ideas about what is possible, about what I can do in a day. Inspired from that trip, I awoke on Monday the 5th, grabbed my pack and headed for the Middle Fork Road.

To get to Marten Lake, you must first walk 2.8 miles along the gentle Taylor River trail; about 75 minutes of walking for a plodder like myself. Normally 2.8 miles is the HIKE ITSELF for me! 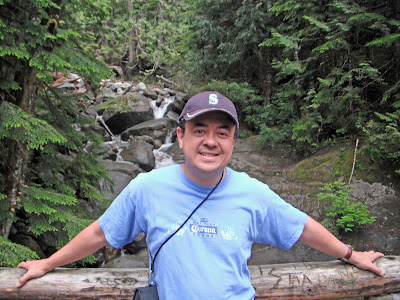 I stopped at the bridge across Marten Creek for a break. While there, I was chatting with some passers-by who took my picture and told me that there were a couple of guys right behind them who were going to Marten Lake too. I decided to wait for them at the beginning of the trail, which is just before the bridge.


The guys showed up few minutes later; Alec Thomas (above) and Mike Vega (below).


Calling the path to Marten Lake a "trail" would be charitable at best. The word "scramble" seems more appropriate. The unmarked "scramble" starts in the trees just before the bridge over Marten Creek. 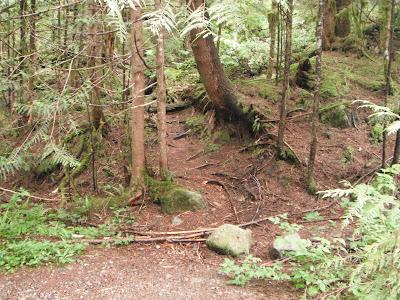 The next 1.5 miles tortured us with thousands of slippery tree roots, slick rocks, bushwhacks and straight-up climbing. I knew it was going to be hard but I had no idea it was going to be THAT hard. It took us 2.5 hours to climb to within 200 vertical feet of the lake and that's when I hit my wall. We'd spent the last 20 minutes climbing at a 45 degree angle on slippery roots and muddy rocks. We had somehow lost the trail and were scrambling up RIDICULOUS inclines. My legs were shaking and I was losing my balance; I knew that I needed to rest a while, even though we were so close. I told the guys to go on, but you know what? They graciously waited for me just up the trail while I ate some trail-mix and rested.


15 minutes later, I was back on my feet and together we busted out of the brush onto the trail. We followed it the last 100 yards to the Marten Lake, which was beautiful! Campsites dot the peaceful glade around the outlet of the lake. The far side of the lake is bounded by impressive granite cliffs.

The weather was overcast and cold. I brought out the trail boat anyway and paddled around for about an hour. Hooked two fish; lost one but the other was an 11" rainbow. I was going to stay longer but decided instead to join Alec and Mike on the way down. They had been such good companions I was loathe to give them up!


Going back down was almost worse than coming up; its a miracle that none of us got hurt. After another 90 minutes of torture, we arrived back at the Taylor River Trail. I exchanged cards with my new friends and said goodbye. I continued UP the Taylor River trail another mile to check out Lipsy Lake and Otter falls. Like Marten Lake, Lipsy is unmarked and I had to scramble around to find it (thank you Garmin!).


Otter Falls is downright amazing. Water tumbles at least a hundred feet down a smooth face, plunging into the pool named Lipsy Lake. Calling it a lake is generous, its clearly just a large beaver pond. Looks like a great place to spend an afternoon with kids if you are camping nearby. As I stood there taking pictures, I realized that it was 8pm and I was 4 miles away from my car! I high-tailed it back as fast as I could but still had to walk the last mile in the dark.


I can finally cross Marten Lake off my TODO list! This hike was a personal milestone for me; by far the hardest day of hiking I've ever done. Also, 11+ miles, the longest. The best part about the Marten Lake hike? The sense of victory afteward.